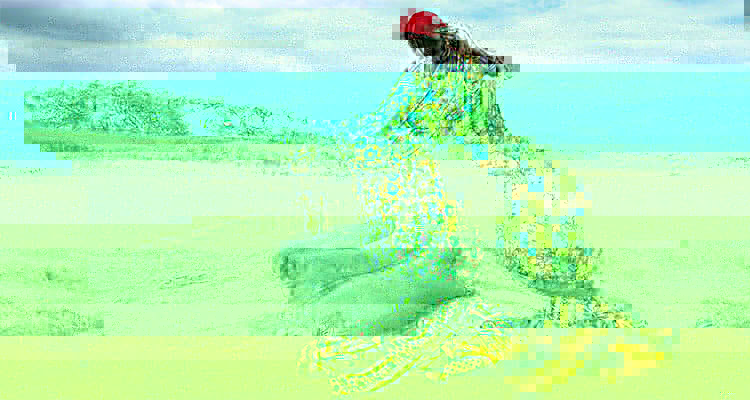 Are marginalised people being overlooked in decision making processes around development and adaptation? Daniel Morchain reflects on the relationship between knowledge and power to influence outcomes.

Amina Hassen collecting water from a well dug by villagers in Harisso. They have been working for more than three hours to fill their leather bags (Kerid) with water. The holes are getting drier making it more difficult to get water from them. Often water collected this way is not suitable for drinking. Amina is seven months pregnant. Ethiopia. Credit: Abiy Getahun /Oxfam

The language,  values, hierarchies and systems of those who hold power and influence strongly shape the way the world works and what spaces of dialogue and dissent are opened or closed. All of this serves to reinforce the dominance of one way of knowing, thinking and doing over another (see Logan Cochrane for more on this).

Ahead of the upcoming World Day to Combat Desertification and Drought, Oxford University’s School of Geography and the Environment organised a conference in which Dawn Chatty, a social anthropologist and academic, spoke about the artificial pressures put on nomadic peoples by governments to settle. Although environmental sustainability is often – and at least partially erroneously – argued simply as a case for leaving these primitive lifestyles behind, economic and political agendas, as well as self-interest, are more often the true drivers. The imposition of a widely accepted knowledge over a marginal one triumphs.

Of course knowledge doesn’t just come from lived experience, I mean, from the wisdom we carry with us. Science has helped us understand the world so much better. Let’s take human-induced climate change. It’s a fact right? Yes. It’s also true that we need to do something about it. At least if we care about the future.

But beware: science can be used by power holders to block out ‘inconvenient’ sources of knowledge. What I challenge is when the urge for climate change adaptation action is used to impose a given knowledge. Sometimes ‘alternative’ facts are put forward by politicians, but also sometimes, reliable, accurate and plain good knowledge coming from peer-reviewed processes in the natural sciences and from climate modelling is used over the knowledge of marginalised people who have no power to gain recognition.

Weisser et al  say it better than I have: ‘The answer to one of the key questions in adaptation research … will remain incomplete as long as one talks only about changing climatic conditions’. It’s the ‘so what about people and planet’ that will not only complete the answer, but should be its foundation. At present though, the balance is overly tilted toward prioritising one type of knowledge over another. This imbalance is used by powerful actors worldwide to maintain control and ownership over the development agenda.

Two weeks ago the UK’s Arts & Humanities Research Council held an International Development Summit, at which Prof. Peter Piot, Director of the London School of Hygiene and Tropical Medicine, argued that science today is about excellence and not relevance. I was glad to hear him say that this has to change radically. What he meant was an increased emphasis on relevance in the sense of impact, usefulness and usability. This is definitely much needed, but the change also has to be understood in the sense of genuinely opening up science, to a multitude of knowledge within and outside academia.