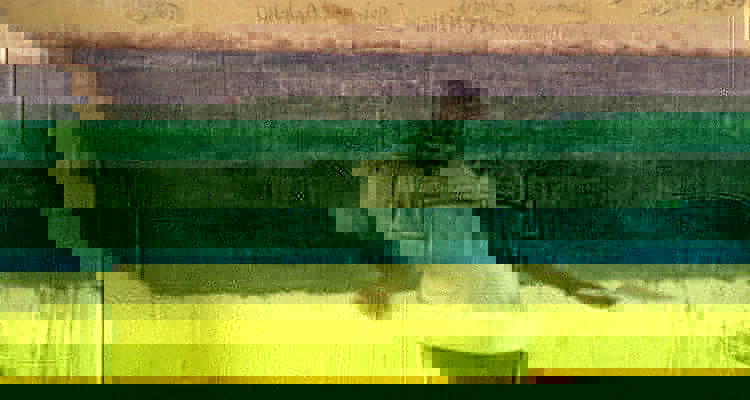 ‘Our country had suffered from war and under-development for generations, but we knew education could help us find a better path’. Martin Lubajo shares his journey from refugee in Uganda to teacher and trainer in South Sudan, striving to ensure that children do not miss out on their education even amid the ongoing war and humanitarian crisis.

In 2009, I came to South Sudan for the first time as an adult. It was an adventure to see just what this country of mine would look like. I knew that most of it was rural: small villages and vast plains, but I imagined Juba would be a well-developed city, like the other East African capitals I knew. I had a surprise in store for me. In every sense, this was a country at the very beginning. The buildings in Juba were small and in bad shape and there were few tarmacked roads. Most of the services available were basic. But what stood out most to me was the extremely low standard of education.

However, development was starting: new roads were connecting Juba to other towns and linking South Sudan to its neighbour Uganda. Goods started pouring in and my fellow South Sudanese refugees started coming back home too. Now to see what we can do about these schools, I thought.

My own childhood and education was in a refugee camp in Uganda. We studied in the open air under trees, using sawn-off branches as benches and tables made of grass and sticks.

My own childhood and education was in a refugee camp in Uganda. We studied in the open air under trees, using sawn-off branches as benches and tables made of grass and sticks. We were motivated to study and learn though. Our teachers, fellow South Sudanese refugees, were so dedicated to teaching us, even though they got little or no pay; we couldn’t help but be inspired.

When I finished school, it was a natural decision for me to go into teaching. Many of us did. Our country had suffered from war and under-development for generations, but we knew education could help us find a better path.

My old teachers were proud of me when I graduated as a teacher. One of them used to tell students, “Martin was here as a student and now he is back here teaching: work very hard and you can be too.” It motivated me to be held up as a role model and encouraged me to push myself further still. I went back to school after a year and completed a diploma in Education.

I came back to find a very low standard of education. Today, just 27% of children are in school… Most teachers are not trained professionally.

I taught in Uganda for four years and finally made my return to a now peaceful South Sudan. As I have mentioned, I came back to find a very low standard of education. Today, just 27% of children are in school, and even for them, the quality of the education is rarely strong. Most teachers are not trained professionally.

But it was clear from the number of advertisements for teacher trainers that others were determined to change this situation. I applied to join IBIS (now Oxfam IBIS) as a teacher trainer and supervisor and got the job. We started by running programmes that condensed an eight-year primary education into four: helping our students to catch up on the years lost.

I was friendly with my teachers. To encourage them, I would sometimes get up so we could teach the class together. We had good rapport. Sometimes to measure how my teachers had grown, I would teach a lesson myself and the teachers would supervise me. I would do things incorrectly (intentionally, of course!), and when they called me out, I would shout “Bravo, you got it!”

But in 2013, war started again; this time among ourselves, the Southerners. Any hopes of development died. Our big ambitions were suddenly put on hold and we were fighting just to keep education alive. Schools have been looted and burned to a crisp and nearly four million people have fled their homes in the past four years. Where once our parents ran with us to Uganda because of war, today it is us taking our children there for safety.

I am staying here though. We must try and prevent this war from creating another lost generation of young people. At Oxfam IBIS, we have had to be flexible and adapt our approach to education. We’re still running longer-term projects where some stability remains, but we’re also doing ‘emergency education’ programmes. These involve travelling with Oxfam’s roving rapid response team to meet the educational needs of huge displaced populations: we train teachers, deliver learning materials and make sure children do not miss out on months or years of education after fleeing their homes. Aside from the need for education, it can be a distraction and a relief for the children to think about something other than their horrific encounters.

Education must remain a humanitarian priority because as well as shaping lives, it saves them. In one of the towns where we are based in the north of the country, children were once expected to go and fight in the war. We found that one of the main reasons for this was that there was little else for them to do; it was the simple act of providing an alternative – education – that saved them. Indeed, the children told us that we had rescued them.

As well as the direct effects of bullets and bombs, the war has also crashed our economy. Of course, we cannot hope to solve this problem by ourselves, but our adult education classes are at least helping people to make a little money and bring goods to their towns. We take a practical approach, combining basic literacy and numeracy with business skills. In one school, we provided a small business grant when the learners had studied to a good level. With this, they set up tea shops, clothes shops and livestock trading businesses; and when we came back three months later, they had tripled the investment.

In the long run, we want to keep aiming higher: to reinvigorate teacher training colleges, push for significantly more government money for schools and make sure we can pay our teachers more. Wherever you go, you find people want to study and learn and teachers who want to help them. We can make great strides when we have peace. For now though, we are fighting just to keep education alive.

Martin Lubajo is a teacher and former refugee, he works with Oxfam’s education programme in South Sudan.