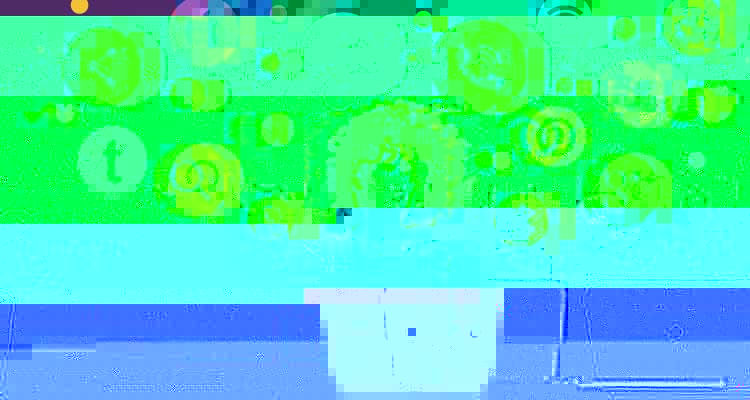 In a world where the digital landscape is rapidly changing the way we access information, the extent to which technology can help or hinder those affected by gender based violence (GBV), is by no means black or white. Kirsten Bickford reports back from Lebanon where activists met last week to discuss the gendered dimensions of our digital age.

The internet, like any other technology, is not a gender-neutral environment. It serves people globally to speak out, organise and mobilise, as much as it is used to attack and silence them. Forms of on-line harassment and sexual exploitation are exacerbated by our hyper connectivity, which can lead to further harm off-line. Yet, on-line reporting and monitoring is being used to challenge the structural causes of GBV – it also provides a platform for support and dialogue which can make women feel safer.

This debate sits at the heart of a wider issue, which is how the ‘digitisation of everything’ is shaping levels of gender and social justice in our lives. Many aspects of our information society are yet to reach a level playing field for girls and women – this is often referred to as the ‘digital gender divide’ – and in addressing it, leads us to ask: Whose voices need to be heard and where?

It is this question which Oxfam wanted to shine a light on, in support of this year’s 16 Days of Activism Against Violence Against Women.

Oxfam kickstarted events with a two day conference in Beirut, exploring the gendered dimensions of the digital age in the Middle East and North Africa –with particular focus on how this is affecting GBV in the region.

‘The internet can be a window to freedom, but violence closes this.’

Lebanon’s diverse digital landscape provides an interesting context for hosting such an event. On the one hand it sits low on the Global Gender Gap Index and has a significant urban/rural digital divide. But it is also cited as ‘the tech hub’ of the Middle East – boasting its own Digital District, with more women working in it that men. Beirut is rapidly shaping up to be a powerhouse for start-ups.

Against this back drop, the conference attendees were a rich mix of CSOs, women’s rights activists, digital rights experts, journalists, creatives, private sector and technology professionals.  Working with our local partners, SMEX, the Knowledge Workshop and HumanityX, we convened a platform for thought-provoking debate, workshops and a co-creation session focussed on finding innovative solutions to GBV.

This provided insight on a range of topics, from online violence; internet ownership; data gaps; digital surveillance, censorship and access to relevant content, to, data privacy; social media behaviours; meaningful digital literacy and women’s role in designing the products touching every aspect of our lives.

‘Panellists delivered powerful testimony from countries across the region, many of which have seen a rise in GBV since the Arab Spring’

Panellists delivered powerful testimony from countries across the region – Egypt, Tunisia, Palestine, Jordan, Syria, Kuwait and Lebanon – many of which have seen a rise in GBV since the Arab Spring of 2011 , amidst the subsequent political unrest. While their personal stories reflected the nuances of their own society’s social norms, they were also a reminder of challenges, which remain universal to this part of the world.

We heard repeatedly about the depth of fear and shame when it comes to reporting GBV in patriarchal societies, the absence of legal recourse for those who do report and the  continued vulnerability of on-line users to surveillance. The lack of awareness about what GBV actually is, was also highlighted, with one woman describing it as the, ‘systemic dismissing of those who voice their concerns about it”’.

Above all, these discussions highlighted the value in having a safe space to meet face to face in the spirit of collective action – in a region where the ability to do this, is so often compromised by the very issues the conference was addressing.

Quoting a speaker from the event: ‘The internet can be a window to freedom, but violence closes this.’

(Outputs from this Beirut event were also debated at Safe to Speak Out in London, UK (Monday 4th December), featuring policy shapers, researchers, activists and technologists. A panel highlighted other contexts, featuring cutting edge work to conduct research, use technology and shape policy to end violence against women around the globe).

Kirsten is Head of Business Engagement at Information Services, Oxfam GB. Prior to joining Oxfam she worked as a journalist working as a journalist and editor for ITN, the UN’s news service, the BBC and the International Herald Tribune.