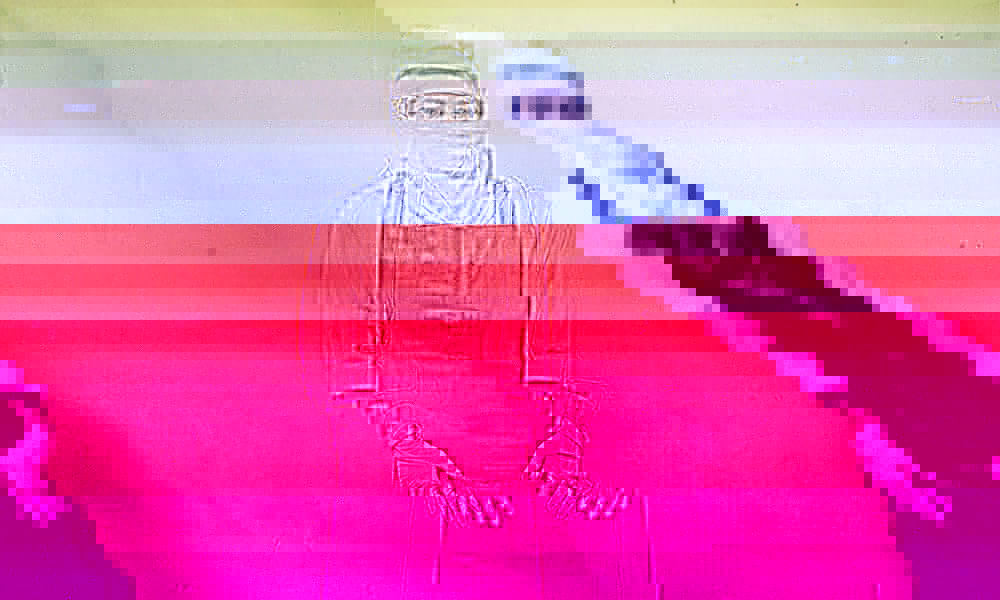 Recently Oxfam has been calling on supermarkets to end the human suffering in their supply chains for the Behind the Barcodes campaign. Here Rachel Wilshaw goes into more detail on the practical actions supermarkets can take and why it’s so important.

To earn the minimum wage, Budi (28) must peel as many as 950 shrimp in one hour. She often skips lunches and toilet breaks and works an hour of unpaid overtime every day to meet try and meet the target. Credit: Adrian Mulya

Oxfam’s Ripe for Change report highlights hunger and suffering amongst the people who grow and process our food. Across a basket of 12 common food products, we present evidence of in-work poverty and a deep disempowerment, especially among women workers. As well as this, we show the decline in the share of the consumer price going to workers and small-scale farmers over time, compared with the supermarkets. Conventional approaches to identify and manage non-compliance with companies’ codes and a reliance on sometimes superficial ethical labels, need a complete rethink.

What can companies do to wean themselves off their reliance on compliance audits and embrace a better way to manage human rights risks, while delivering a positive impact for the people in their supply chains? At the outset of our campaign we are asking supermarkets to look at what steps they can take to better ensure workers’ wellbeing, from the women peeling shrimp in processing plants in South East Asia to those picking grapes in South Africa.

This approach should be robust enough to do less harm and more good. In this blog we pick out elements of the more robust approach Oxfam is calling for and signpost ways that companies with a strong CSR team, and support from senior executives, can transition to it in a year or so.

The approach is set out in our Workers’ Rights Recommendations for Food Retailers. There are three buckets of ‘asks’:

2) Take action in your own supply chain

3) Take action beyond your own supply chain

This starts with greater supply chain transparency, enabling consumers, civil society and investors to find out more about where and how products are produced. So which companies are doing this? In food (and now fish), Marks & Spencer and Taylors of Harrogate (tea and coffee) In garments Nike did this back in 2005, but H&M and ASOS have followed. In electronics HP stands out for publishing not only the names and addresses of its first tier suppliers but also its commodity and component suppliers. It shows a company understands risks for workers when it recognises the limitations of audits, something Tesco has done in its Modern Slavery Statement:

“While well conducted audits can play a useful role in identifying some human rights abuses, they are only one part of the answer. We have therefore focussed audit on high risk locations whilst focussing most resource on alternative approaches” – Tesco

Carrying out a human rights due diligence process can help identify the key problems in a sector, so a more robust strategy can be formulated to tackle them, see for instance PepsiCo and Thai Union. To do the job well means going deeper into a supply chain via a human rights impact assessment. This involves looking at adverse human rights impacts linked to the business, and can only be done through meaningful engagement with workers, affected communities and civil society stakeholders. Guidance by Oxfam and Danish Institute for Human Rights is available. Examples include Nestle in its cocoa supply chain (one on labour standards, one on gender) and S-Group in Italian tomatoes. The Co-op has committed to carry out and publish such assessments in high risk foods by 2021.

Good practice also means tracking and disclosing the rough proportion of female and male workers at production sites, helping to make visible trends in its workforce. SSE and BHP have done this for their operations, whilst Walmart has set targets for sourcing from women-owned businesses. Extracting gendered data from Sedex can help, something Sainsbury’s does, but thousands more of its members could readily do.

Last but not least, having in place a grievance mechanism that gives workers ‘access to remedy’ and meets the criteria set out in the UN Guiding Principles on Business and Human Rights. Know the Chain identified Wilmar as a notable example in the food and beverage sector for its public grievance mechanism. The best such mechanisms involve workers’ needs being represented via a trade union. In sectors where that is a distant prospect, such as Thai seafood, networks such as the Migrant Workers’ Rights Network and the new Fishers’ Rights Network can be a starting point until it becomes legal for migrant workers officially to register in a union. The litmus test for a grievance mechanism is whether it is trusted and used by workers.

2) Take action in your own supply chain

The second bucket of recommendations relate to taking action in the company’s own supply chain. A starting point is transitioning from a compliance-based code, which simply pushes onto suppliers the responsibility for good labour standards, into a policy on human and labour rights. This includes proactive elements such as actions to prevent forced labour rather than just ‘no forced labour’ and a framework for continuous improvement. Unilever’s Responsible Sourcing Policy is a good example of this. There also needs to be a (separate or incorporated) gender policy.

Deal fairly with suppliers and engage with the unions

Source: Oxfam. In sectors where minimum wages are higher, the gap to close to an estimated living wage is much smaller.

Taking action also means business practices which deal fairly with suppliers by taking into account production costs, reasonable payment terms, long-term contracts and predictable order volumes. Sainsbury’s commitment not to use Unfair Trading Practices is a good start. Allied to this is the need to align a company’s sustainability and sourcing objectives and designing incentives that improve things for workers rather than, as a supermarket disclosed to us in private recently, giving a bonus to buyers based on the numbers of audits commissioned.

Alongside these go the publication of an action plan to address human rights risks. And of course meaningful engagement with trade unions, such as Unilever’s work with IndustriALL and IUF to tackle workplace harassment and selecting suppliers that will not intimidate workers wishing to join or forming a union.

Last but not least, getting to grips with the issue of living wages, recognising that these would help achieve the sustainable development goals and that inadequate minimum wages can leave people trapped in poverty. For example Axfood (the second biggest food retailer in  Sweden) has committed to assess the living wage gap in three high risk supply chains and to work with stakeholders to close it by 2020.

3) Take action beyond your own supply chain

Taking action beyond a company’s supply chain includes getting into dialogue with others about the systemic problems which have deep roots. For instance, how do you address problems across a sector rather than down a specific supply chain? What should companies do in countries where human rights are not protected and ‘civil society space’ is shrinking? Multi-stakeholder initiatives which include trade unions and NGOs, such as Ethical Trading Initiative (ETI) and Equitable Food Initiative can help here.

All of this will only be effective if a company has fit for purpose corporate governance. This includes disclosing how the board is set up to manage human rights risks and making an explicit commitment to the UN Guiding Principles on Business and Human Rights, M&S and Tesco have done this. And it means signalling the company’s commitment to gender equality by signing up to the UN Women’s Empowerment Principles, which nearly 2000 companies have done including the retailer Carrefour and brands such as Danone , Kellogg’s and Mars.

This list of asks in our Behind the Barcodes campaign can be daunting at first sight. But as demonstrated, most are being met by companies in one sector or another, some are waiting for innovation and leadership. Taken together, the approach will help companies manage supply chain risks, meet emerging regulations, achieve positive impact on sustainable development and earn and keep the trust of consumers, investors and other stakeholders. We will campaign publicly for the changes we are advocating, but we will also provide advice to companies on good practice and, when visible progress is made, welcome it publicly.

Rachel Wilshaw is the Ethical Trade Manager for Oxfam GB and a board member of the Ethical Trading Initiative. Her role involves advocacy and advice to companies on best practice in relation to labour rights in global supply chains.