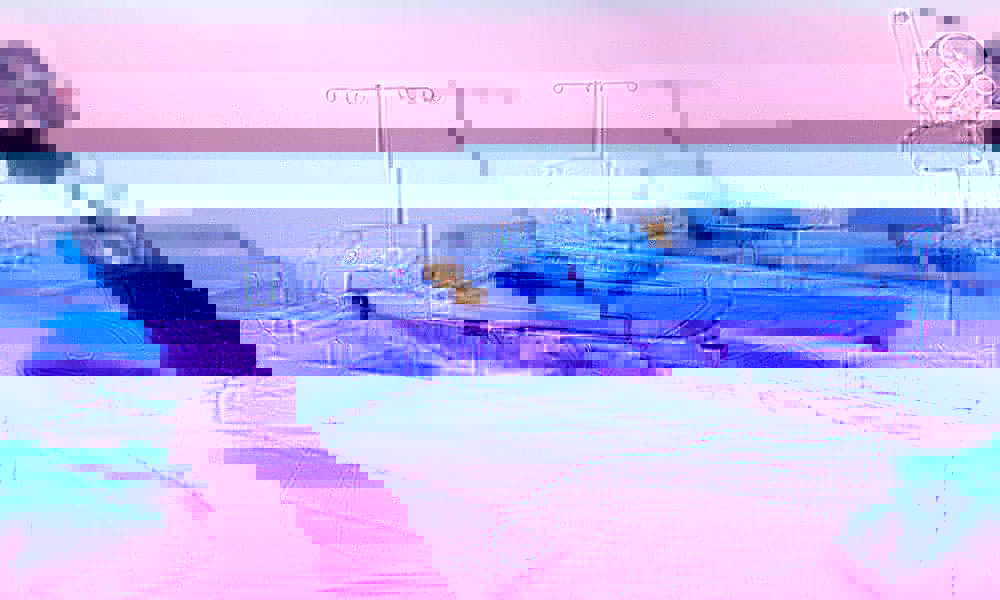 As all four corners of the globe are shutting down to flatten the curve of the coronavirus infections, the most vulnerable workers are the ones that are hit hardest, whether it is in New York or New Delhi. Meanwhile it is the richest workers with the best sick pay and other labour protections who can work from home in relative safety and financial security.

The virus has laid bare the brutal inequalities of the current economic, political and social system. This is particularly true in the world of work. Workers around the world have been heavily hit by the pandemic and the efforts to face it.  Research from Kings College London and the Australian University has predicted that half a billion people could be forced into poverty.  Most of these people are low-wage workers struggling to survive. The ILO forecasts that workers are set to lose an addition 3.4 trillion dollars in income because of the pandemic.

Those who are the most hit are those who have been hurt for decades by so called labour market ‘flexibilization’ policies that allowed firms to erode labour rights and protections, to try and cut down on labour costs to increase their profit margins. It is in countries where workers are already existing on the margin with minimal rights that the economic impacts of the crisis hit hardest.

Informal workers have been impacted more than others. They constitute 90% of the overall workforce in some countries. Many of them are an invisible workforce that the responses of governments to the virus do not reach. There over 100 million home based workers around the world, and according to WIEGO they account for 30% of non-agricultural workers in Nepal, 15% in India and 18% in South Africa. The majority of home based workers are women who have seen their income lost as many of them are at the bottom of a long supply chain that has been disrupted by the pandemic.

The impact of the crisis is disproportionally hard on women workers

Another invisible workforce are domestic workers, many of whom lost their income as they are sometimes not allowed inside houses anymore. Others, mainly live-in domestic workers have seen their workday prolonged and intensified as employers want houses disinfected and extra cleaning done without any kind of compensation. Women migrant domestic workers in many countries face abuse from their employers and live slave-like conditions in many contexts such as the Middle East, who along with other migrant workers face serious violations due to the notorious kafala system.

In many Middle East countries, migrant workers are crammed in overcrowded labour hostels where for them social distancing is not an option. Currently, the ILO estimates that 23 million migrants work in the Middle East. Even in normal times, they regularly see their wages confiscated and are terribly over-worked.

The impacts of the crisis is disproportionately hard on women workers. In some parts of the MENA region, as movement restrictions were announced, women workers were the first to be sent home by employers because of their domestic care “duties”. Women’s’ paid and unpaid care work continues to be undervalued while at the same time governments and societies are relying on it more than ever to fight the pandemic. Health workers and carers in general are on the frontline. On one hand, women constitute 70% of the health care workforce, yet only 25% hold senior roles. Many of them are paid at poverty wages and are on the front line exposing themselves to being infected daily.

At the same time, lockdowns and school closures are only made possible by the unpaid work of carers in families, who are overwhelmingly women. Now, more than ever, is the time to recognize and value such work.

Many workers are also facing discrimination in the time of the Coronavirus. In many countries where a lockdown was imposed and only essential businesses were allowed to open like supermarkets, street vendors who sell fruits and vegetables on their carts were not allowed to continue their activity. In hospitals, janitors and cleaning staff are likely to be underpaid and informally employed. Despite being exposed to the virus, they are not protected, and might not be able to afford to be tested or treated in context of privatized healthcare systems in many countries.

The pandemic and its responses have presented additional proof of the failures of current labour legislation and of weak labour rights that gives primacy to profit over decent and dignified work. That formal work benefits, like sick pay, regular salaries, contracts, medical cover- these are only for the lucky and largely wealthier minority of workers.  To compound this, many governments are using this emergency to stifle and crack down on freedom of association and organizing.

So called ‘low-skilled’ jobs are essential to the society

No one needs the hedge fund manager or the corporate lawyer at a time like this. The crisis is making clear that those so-called ‘low-skilled’ jobs where women are over-represented, such as care workers, domestic workers, nurses, waste pickers, cashier workers, etc., are the ones who are indeed ‘essential services’ to the society. Today more than ever, we are relying on those jobs to keep society going. Protecting the most vulnerable workers in this pandemic and its aftermath should be a priority through a combination of measures aimed to support different categories of workers as well as universal social protection measures including universal health coverage and universal basic income.  The response must be focused on supporting women workers.

After this crisis there can be no return to the systematic erosion of labour rights and the structural exploitation of the low-paid that has left so many hundreds of millions vulnerable to this crisis.  Now the world has seen how valuable these workers are to our collective future, we should never forget this.  Fair treatment of workers is the foundation of a fairer world.